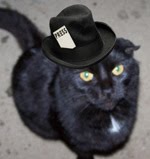 Put Some Adventure Into Friday Features (Sci-Fi, Too)

This week's Friday Features includes my Library's playlist of adventure and science fiction book trailers.  Click here to select among individual titles.  Click the image above to play the entire playlist, which, at 33 videos, means quite a long bit of playing, if you were to watch them all at once.  You can stop the playback at any time, so you might just watch the first few book trailers to whet your adventurous appetite.

P.S.  Science fiction inspires musicians to write cool songs.  Robert A. Heinlein wrote Stranger in a Strange Land (1961), which inspired David Crosby to write an instrumental interpretation (1965) when he was a member of the Byrds.  The song appeared as a bonus track on the 1996 CD re-issue of the album Turn! Turn! Turn! (originally released in 1965).